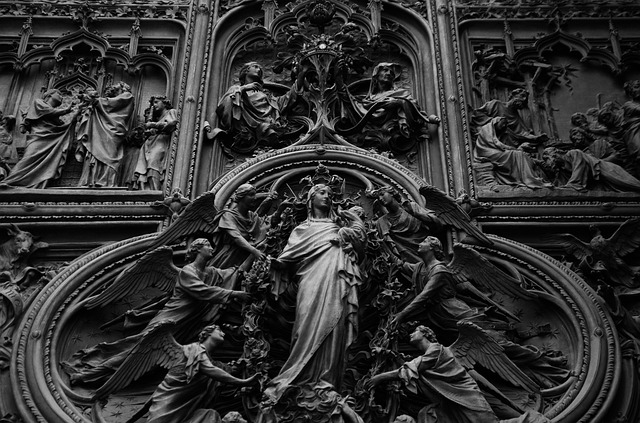 Duomo of Milan – The legend of the dragon Tarantasio

The facade of the Duomo of Milan never ceases to amaze. If you look carefully to the right of the central doorway, in the lower part of the marble frieze, you can make out the representation of a small dragon. According to popular tradition, this is none other than the famous dragon Tarantasio.

The dragon Tarantasio was the undisputed ruler of Lake Gerundo between the 12th and 13th centuries. The lake was a vast expanse of stagnant water that has now disappeared, situated in Lombardy, straddling the beds of the rivers Adda and Serio. It was in an area that today could be defined as lying between the provinces of Bergamo, Lodi, Cremona and Milan.

According to legend, the fantastic creature frequently emerged from the waters. It devoured children and animals, emitting deadly miasma and spreading terror in the countryside. Until one fine day, the dragon was killed, according to some by Frederick Barbarossa, according to others by Saint Christopher or even – according to a source destined to become very popular in later centuries – by one of the Visconti family. It is said that this heroic gesture gave rise to the coat of arms of the noble family, depicting the famous “biscione” devouring a child.

The legend was widely spread throughout the Milanese territory. It was even a source of inspiration for the sculptor Luigi Broggini, who used Tarantasio as a model for the image of the six-legged dog, the symbol of Eni, whose first methane field was discovered in 1944 in Caviaga, a hamlet of Cavenago d’Adda.

So, even centuries later, the Tarantasio dragon never ceases to fascinate.

Did you like this curiosity? If you want to read more, about Milan or thousands of towns, download Secret Maps!

The Black Lady – The spectre of Parco Sempione

Egyptian Museum – The Tomb of Kha and Merit