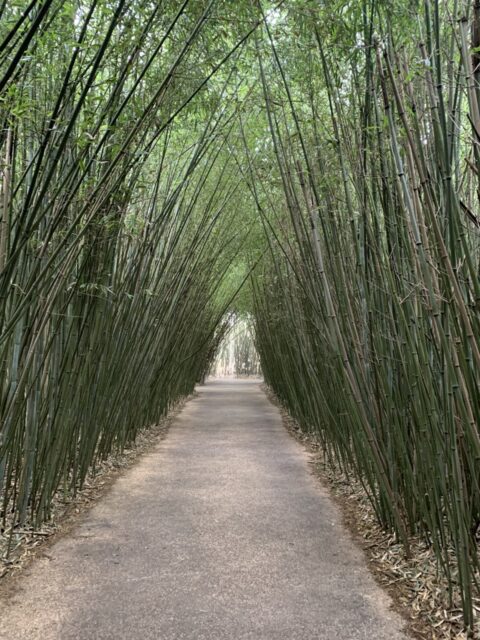 Fontanellato – The Labyrinth of the Masone

Near Fontanellato, a small town in the province of Parma, lies one of the most curious and evocative places in Italy: the Labyrinth of the Masone.

Opened in 2015, the Labyrinth of the Masone is the brainchild of Franco Maria Ricci, who has always been fascinated by labyrinths. It is a cultural park that extends over seven hectares and includes a labyrinth made up of bamboos of different species (the largest of its kind in the world). Ricci discovered his passion for bamboo in the 1980s. He planted more than 200,000 bamboos during these years and around twenty different species, from dwarf to giant bamboos, can be found in the park. Bamboo is in fact an extremely fast-growing plant that does not get sick, does not shed its leaves in winter, and absorbs large amounts of carbon dioxide.

As for the botanical part, Ricci relied on Davide Dutto, and inspired by the labyrinths depicted in two Roman mosaics, one preserved in the Bardo Museum, the other in the Kunsthistorisches Museum in Vienna, he created one, introducing traps and forks into the Roman labyrinth scheme. The perimeter, in the shape of an eight-pointed star, is reminiscent of fortified cities such as Palmanova or Sabbioneta.

This art collection, spread over five thousand square metres, has been collected by Ricci over some fifty years, reflects his personal taste and is constantly expanding.

The works, including paintings, sculptures and art objects, number around five hundred. It starts in the 16th century, with works by mannerist artists, including Girolamo Mazzola Bedoli, Luca Cambiaso and Ludovico Carracci. It continues into the 17th century, widely represented in both painting and sculpture, with works by Valentin de Boulogne, Gian Lorenzo Bernini and Lorenzo Merlini. Considerable space is dedicated to the 18th and 19th centuries, with paintings by Francesco Hayez, Giovanni Carnovali, pastels by Rosalba Carriera and Jean-Étienne Liotard. Then, there are also watercolours by Giuseppe Pietro Bagetti, marble sculptures from the Neoclassical period depicting mainly Napoleon-related figures. All by Antonio Canova, Lorenzo Bartolini, François Joseph Bosio. Not to mention the terracottas in the French sphere. Finally, special attention is paid to artists from the Parma area.

In short, the Labyrinth of the Masone is an absolutely unique place with remarkable treasures, which absolutely deserves to be visited.

Abbey of San Galgano – The Sword in the Stone