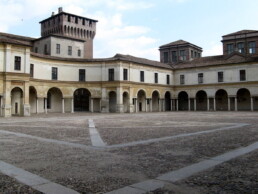 Each duke wanted to add a wing for himself and for his own works of art. The result is an area of more than 35,000 square meters that make it the sixth largest palace in Europe. It is right after the Vatican palaces, the Louvre Palace, the Palace of Versailles, the Royal Palace of Caserta and the Castle of Fontainebleau.
Like all historical buildings that have crossed the centuries, the Ducal Palace also boasts its secrets, its anecdotes and above all ... its ghosts.

In what is now Piazza Pallone, the courtyard of the Ducal Palace, a plaque commemorates the sad death of Agnese Visconti. She was the unfortunate wife of Francesco I Gonzaga, who was unjustly tried by him on false charges of adultery. The accusations were based on the presumed adultery of Agnese with the knight Antonio da Scandiano. The sentence for both was inevitable: the death penalty. And so it was that on the morning of February 7, when she was only 28 years old, Agnese was beheaded while Antonio was hanged.

It is said that the ghost of the young girl still wanders in these parts and there are many who claim to have heard the cry of a woman passing in the square. While others claim to have seen at night, between the windows of the Castle and the Palace, a sort of ghostly light that went up and down between the rooms.