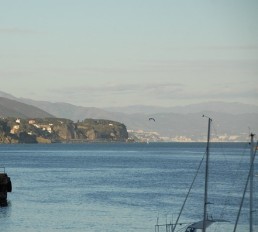 Andora - The story of Andalora and Stefanello

Andora is a pretty town located in the westernmost part of the Riviera delle Palme on the administrative border with the province of Imperia. Situated exactly between the inlets of Capo Mele (to the east) and Capo Mimosa (to the west), at the mouth of the Merula stream that runs through it, it is famous for its vast sandy beaches. These are in fact considered among the most beautiful in western Liguria and extend for almost 2 km in length.

A romantic legend is linked to the birth of the town of Andora. It is said, in fact, that a beautiful girl named Andalora (meaning 'golden heath') once inhabited these lands. This maiden loved deeply and was equally loved by the young Stefanello. Unfortunately, fate was adverse to them and one day the ruthless Saracen Al Kadir arrived and kidnapped Andalora to marry her, tying her to the mast of his ship.

Stefanello then immediately ran to her aid, secretly freeing her, but in his escape he was mortally wounded. It is then said that before he died, Andalora clung to him and the two lovers both threw themselves into the sea, dying in the waves. The Saracen Al Kadir was deeply moved by such a tragic scene. Not only did he immediately convert to Christianity, but he decided to name those places after the two lovers. Thus Andalora became Andora and Stefanello became Stellanello (the neighbouring municipality): two villages united forever.

Did you like this curiosity? If you want to discover more about the surroundings of Italy, download Secret Maps!