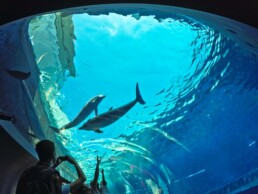 Ponte Spinola - The Aquarium of Genoa

The Aquarium of Genoa is one of the great Italian attractions. It is an aquarium located in Ponte Spinola, in the 16th century old port of Genoa, which at the time of its inauguration was the largest in Europe and the second largest in the world.

The Aquarium of Genoa boasts an exhibition route that shows more than 70 environments. Here are 12,000 specimens of about 600 species, from all the seas of the world. From rare species such as manatees, to better known ones such as dolphins. From penguins, to the great predators of the sea: sharks. And then jellyfish, seals and colorful tropical fish.

The Blue Planet is the new room that kicks off the exhibition at the Aquarium. A spectacular video mapping welcomes visitors with an evocative sequence of images of marine animals from all the oceans. At the heart of this immersive experience: the importance of water for life. In the semi-darkness, the imposing moray eel cave appears. It is a cylindrical tank more than 6 meters high, wrapped in an arrangement that resembles the section of a shell. Here, together with the moray eels half-hidden among the rocky ravines, some scorpion fish can be seen, often motionless on the seabed. In the same room you can also observe two species of seahorse and the most intelligent of invertebrates: the octopus.

We continue in the lagoon of the mermaids, where manatees, herbivorous aquatic mammals, swim. It seems that these tame animals gave rise to the myth of the mermaids, mythological figures "half woman and half fish".

A portal with a holographic effect welcomes the public to the shark bay and anticipates the emotion of the sight of their large tank. This houses, in addition to several species of shark from various marine environments, other interesting fish.

The seal island, on the other hand, shows a group of common seals living in the northern hemisphere. Some specimens were born in the Aquarium. Others, abandoned by their mother in the wild shortly after birth, have survived thanks to human intervention.

It continues with penguins and Antarctic marine species. Then, when you enter the Cetacean Pavilion your breath stops for a moment. And your heart begins to beat faster. The four open-air tanks are home to a social nucleus of bottlenose dolphins, the coastal dolphins.

The path in the Biodiversity Pavilion winds its way inside the large Blue Ship of the Genoa Aquarium.

Last exhibition section of the Pavilion pays homage to the great explorers and naturalists of the past. Characters such as Columbus, Humboldt and Darwin. In this area are represented some freshwater and marine environments of the tropical belt.