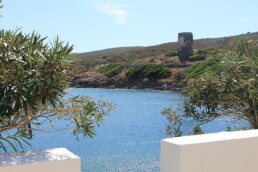 The island of Asinara is an inaccessible area until a few decades ago, whose beauty still intact is the heritage of all.

16 kilometers long and with a surface of 52 square kilometers, it is part of a marine protected area that protects its natural beauty. The entire territory is in fact the Asinara National Park. The name is due to the presence on the island of unique specimens of white donkey, which has also become the symbol of the island and the park.

Asinara has had a certain historical importance. It has become a symbol of isolation because of the penal colony and the lazaret for the quarantine of tuberculosis patients that were established here in 1885. At the time the inhabitants of the area had to leave their lands and move to the northern areas of Sardinia, where they founded the village of Stintino. The Asinara prisons also played a role during the First World War when they hosted prisoners of war, especially Austro-Hungarians. While between '60 and 1997 the island remained in total isolation due to the establishment of the maximum security prison. In this prison were detained under the regime of 41bis some of the most dangerous Mafiosi.

The agricultural penal colony of Asinara had several detachments throughout the island. Each of these was headed by a branch chief, who, in turn, was answerable to the chief marshal, stationed in Cala d'Oliva. Also in Cala d'Oliva resided the director and deputy director, as well as all employed personnel, including doctors.

Asinara is now open again after 115 years of complete closure. So many decades of isolation have had a positive effect. They have preserved the natural environment of the island, saving it from any cement works. And above all allowing the birth of the National Park of Asinara.

Did you like this curiosity? If you want to discover the secrets, legends and mysteries of Southern Italy, download the app of curiosities. Download Secret Maps!