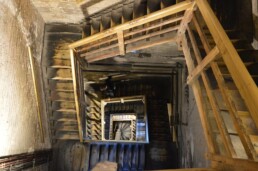 Among the many legends that concern the historical center of ancient Bologna, there is a very special one, very dear to the people of Bologna. It is the legend of the Asinelli Tower.

This legend tells that once upon a time, in Bologna, there was a hard-working farmer who longed to improve the life of his family by expanding his possessions. Therefore, he constantly dreamed of getting rich and giving his loved ones everything they desired.

One fine day, it seems that one of his donkeys fortuitously stumbled upon a trunk, hidden in the ground of a field. As a result, the trunk soon revealed its precious contents: it was filled with precious stones and gold of inestimable value.
In spite of his happiness, the man decided not to tell anyone about what had happened, not even his family. As time went by, gradually, the tenor of his loved ones simply improved. And he jealously guarded his secret, never uttering a word.

After that, the man's son, having become an adult, one day walked in front of the house of a nobleman from Bologna, and fell madly in love with the beautiful girl he saw at the window of his house. It was the daughter of the nobleman, who soon began to reciprocate his love. The problem was her humble origins, since the nobleman would never allow his daughter to marry him. The only way for the young man to realize his dream of love would have been to raise the highest tower in Bologna.

But how could he accomplish such a feat? His joy was great when one day, back home, he confided to his father his torments and he offered him the solution: the treasure of the donkeys.
After that, ten years later, the construction of the tower was completed. In conclusion, the rich nobleman finally agreed to the marriage and the tallest tower in Bologna was dedicated to the lucky donkeys.

Did you like this legend? It's easy to discover many others.