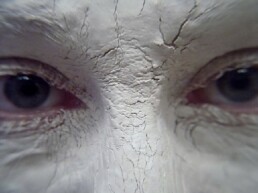 Castle of Montebello - The ghost of Azzurrina

The legend of the ghost of Azzurrina, who is said to dwell in the castle of Montebello di Torriana, is based as often happens on a true story.

Born around 1370, Azzurrina would have been the daughter of Ugolinuccio or Uguccione di Montebello, feudal lord of Montebello di Torriana. She would have died prematurely on June 21, 1375, the day of the summer solstice.
It is said that she was an albino child and that her mother decided to periodically dye her hair black. However, since she dyed it with extremely volatile pigments of vegetable nature, these, accomplice the scarce ability of albino hair to retain the pigment, had given to the hair of the child blue reflections like her eyes. This is the origin of her nickname "Azzurrina".

It is said that on June 21, 1375, while her father was away from his residence, Azzurrina, always guarded by two soldiers, was playing in the castle of Montebello di Torriana with a ball of rags while a storm was raging outside. According to the subsequent account of the guards, the little girl would have chased the ball that had fallen from the stairs inside the underground ice-house, with the intention of recovering it. After that, she literally disappeared into thin air and no trace of her or the ball was ever found again. The storm would have ceased with the disappearance of Azzurrina.

Since then, the ghost of the little girl returns to make her voice heard every five years, coinciding with the fall of the summer solstice.
The solstice of 1990 became famous. The Castle of Montebello had been open to the Museum for only one year, nevertheless, the legend was already in the public domain. There were those who blindly supported it, those who contested it, those who feared it, but everyone talked about it. On June 21, sound technicians interested in these episodes made the first recordings through the use of sophisticated equipment. All frequencies were recorded. In the studio, it was decided to proceed to listening: thunder, a violent downpour of rain, then ... a sound.

Even today, those who listen to those recordings have different reactions. Some claim to hear the cry of a little girl, others a laugh, many say they hear a voice, distinguish a word, many others claim to hear nothing more or less than wind and rain in the storm. The ghost of Azzurrina, however, does not stop talking about itself.

How did you like this story? Find all the most famous ghost stories, search them on Secret Maps!