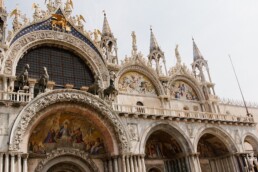 Basilica of San Marco - The legend of the golden shoes

The Basilica of San Marco is one of the symbols of Venetian art and Christianity. Together with the bell tower and St. Mark's Square, it forms the main architectural site of Venice.

The building is very ancient. It is said that the first church dedicated to St. Mark, commissioned by Justinian Partecipazio, was built next to the Doge's Palace in 828 to house the relics of St. Mark. These relics were stolen, according to tradition, in Alexandria of Egypt by two Venetian merchants: Buono da Malamocco and Rustico da Torcello.

The primitive church was soon after replaced by a new one, located in the present place and built in 832. This one, however, went up in flames and so another one was built. The new consecration took place in 1094; the legend places in the same year the miraculous finding in a pillar of the basilica of the body of St. Mark, which had been hidden during the works in a place then forgotten.

Talking about legends, the Basilica guards many of them and one of them is the legend of the golden shoes. Inside the Cathedral, in the Zen Chapel, there is in fact a particular statue, the "Virgin and Child". It is a bronze work with a golden shoe, to which is linked a suggestive story.

It is said that one day a poor believer gave the Madonna the only thing he owned, a pair of old shoes, and they miraculously turned into gold. Of the two shoes, however, only one remains, because it seems that later, a woman reduced to poverty, praying in front of the statue of the Virgin, begged her to help her.

Miraculously, one of the golden shoes slipped off and ended up in the hands of the woman, who managed to get out of her misery.
Do you want to discover other curiosities? Discover all the secrets of your city, download our app!