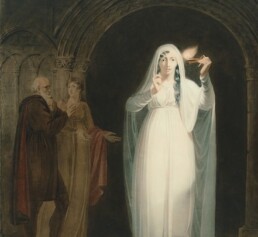 Cloister of Santa Radegonda - The ghost of Bernarda Visconti

The monastery of Santa Radegonda was, together with the church of the same name, a Milanese Benedictine monastery. The complex was suppressed and partially demolished in 1781 to make way for the current Via Santa Radegonda. At the height of its beauty, it was truly grandiose, with four cloisters that included San Raffaele and San Simplicianino. The church was double, according to monastic custom, and it is said to have contained numerous relics. A splinter of the True Cross, a Thorn of the Crown of Christ and a fragment of the veil of Mary and Mary Magdalene.

Despite the building's decline, it holds many curious stories and even boasts its own ghost.
The ghost in question, who would have become famous for his deeds and for the many stories handed down from generation to generation, would be that of Bernarda Visconti, famous "white lady" from Milan.

Bernarda Visconti, daughter of Bernabò Visconti, after her marriage with a man she hated, soon began to look for "distractions". And she found them in a young man who, it is said, immediately reciprocated her feelings.

But the story did not remain secret for long as the two lovers hoped. Bernabò accused the boy of theft, who was forced to confess a crime he had never committed under torture and then publicly hanged. Bernarda's punishment was no less. She was in fact condemned to die of hunger in the darkest of the slammer, guilty of adultery.

All this pain would explain the reasons for so much pain and suffering, told by those who have witnessed the manifestation of her spectrum. All those who have seen her have reported to have noticed the same details: a tiny silhouette, wrapped in a dark cloak, an emaciated face, pale as the moon, brown hair streaked with tawny.

Did you like this curiosity? If you want to read more, about thousands of cities, download the app of curiosities: Secret Maps!