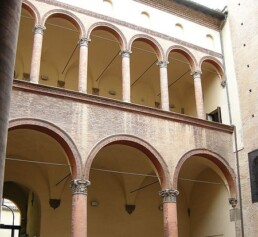 Ghisilardi Fava Palace - The enigma of the Bologna Stone

Palazzo Ghisilardi-Fava is one of the most illustrious examples of Renaissance palace in Bologna, a building constructed between 1484 and 1491. The palace, which currently houses the Civic Medieval Museum of Bologna, contains a truly mysterious object: the so-called Stone of Bologna.

The origins of this stone are rather doubtful. It was noticed for the first time near the complex of Santa Maria di Casaralta, erected in the 13th century as a priory of the order of the Gaudenti friars. Later, the text on its surface (now illegible) was copied onto a new slab of red marble. This copy is the "Stone of Bologna" visible today.

But what does the text indicate? The inscription of Aelia Laelia Crispis has always aroused great interest, especially in the alchemical field. According to some theories, in the epigraph, created by the Gaudenti friars, who for some historians would have been the exponents of an esoteric sect, there would in fact be indicated the alchemical steps by means of which it would be possible to recreate in the laboratory the Philosopher's Stone. The stone able to give eternal life and to transform lead into gold. What is certain is that to date no one has yet managed to turn the enigma of Aelia Laelia Crispis.
Did you like this curiosity? If you want to read more, about thousands of cities, download Secret Maps!