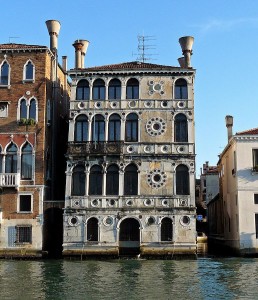 Ca' Dario - The Legend of the Cursed Palace

Today we take you to Venice, to tell you the story of a famous palace with a sinister reputation: Ca' Dario. This ancient building, located at number 353 in the Dorsoduro district, overlooks the Grand Canal. The building was commissioned to architect Pietro Lombardo in 1479 by Giovanni Dario as a wedding dowry for his daughter Marietta. The latter was in fact the betrothed of Vincenzo Barbaro, a wealthy spice merchant who owned the palace of the same name in Campo San Vio.

Giovanni could not have known that his gift would turn into a nightmare.

Ca' Dario is in fact infamous for the alleged curse on it: according to legend, its owners would be doomed to bankruptcy or die a violent death. The first victim of this curse would have been Giovanni Dario's daughter Marietta, who took her own life following her husband's financial collapse. The latter, however, did not have a happy ending either and was in turn killed by stabbing. While the couple's son died in an ambush on the island of Crete. A curse that seems to have no end and that year after year increases the building's sinister reputation.

The most recent tragedy seems to date back to 2002 when, a week after renting Ca' Dario for a Venice holiday, bassist John Entwistle died of a heart attack.

Enjoying this trivia? If you want to discover the secrets, legends and mysteries of Italy, download the trivia app. Download Secret Maps!