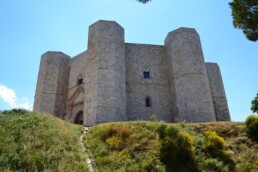 Castel del Monte - The legend of the Saracen

Castel del Monte is a 13th century fortress built by the Holy Roman Emperor Frederick II in the western Murge plateau in Apulia. This is a place of secrets and magic, due to the strong symbolism of which it is imbued. It is believed that in the past it could have been a sort of temple of knowledge, in which to devote themselves to the study of science. Its birth is officially dated January 29, 1240.

According to tradition, it seems in fact that Frederick II ordered on that date that everything necessary for its construction was prepared, although many scholars do not agree with this idea nor do they share the attribution of the work to a well-defined architect. It is not known whether Riccardo da Lentini or Frederick II himself designed the construction. There are even those who doubt that the emperor has ever visited the castle. In fact, historians have found confirmation that he stopped by only a few times.

There are many legends about Castel del Monte. One of the many that circulate concerns its foundation. Tradition has it that in the place where it rises, there was, centuries ago, an ancient temple with a statue. On its head was written: "My head is bronze but at sunrise in May it will be golden". The writing remained a mystery until a Saracen, at sunrise, began to dig at the point where the statue cast its shadow, finding a fabulous treasure. It is said that this treasure ended up (no one knows how) in the hands of Frederick II, who would have used it to build the fortress of Castel del Monte.
Did you like this story? Do you want to discover other legends and curiosities? Look for them on Secret Maps!