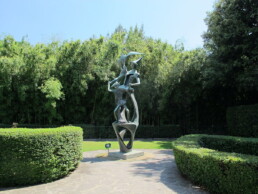 Pinocchio Park is a park commemorating the famous fairy tale located in Collodi, a hamlet in the municipality of Pescia.

Conceived as a theme park for the education of children, it is not the usual amusement park, but rather a place where you have the sensation of retracing a living fairy tale within a path marked by the combination of art and nature. So don't expect special effects or super-technological attractions (at most a few fountains with water games).

Near the entrance there is the sculpture by Emilio Greco of "Pinocchio and the Fairy", near a flowerbed arranged to draw the effigy of the famous puppet. This is followed by an area with a little theater and a refreshment area. The "Piazzetta dei mosaici" preserves the mosaics of Venturino Venturi. Follows the "Village of Pinocchio" and the various sculptures, made by Pietro Consagra (the Carabiniere, the Cat and the Fox and the Snake), Marco Zanuso and Augusto (Bobo) Piccoli.

One of the most evocative corners of the Pinocchio park is undoubtedly the one dedicated to the "Great Shark" (which later became a whale in the Disney cartoon). In the story, the Great Shark ends up swallowing first Geppetto and then the puppet himself. Overlooking a large pool, the large animal in masonry emits at regular intervals of large sprays of water.

Here you cannot fail to enter. A quick zig-zag between the big sharp teeth of the shark and you will find yourself right in its belly. Climbing a few, but narrow, stairs you'll reach the head of the animal, where you can enjoy a beautiful view over the whole garden.