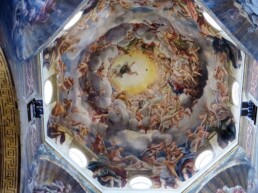 Parma Cathedral - The Assumption of the Virgin by Correggio

Parma Cathedral, consecrated in 1106, is the city's most important place of Catholic worship. The building boasts a rather adventurous history. The first basilica disappeared due to a fire in the 9th century. Under the episcopate of Guibodo, reconstruction work began on a site not far from that of the old church. However, the cathedral built by Guibodo was also destroyed by fire in 1055 or 1058. So it was decided to rebuild it a third time, giving life to the current building.

Parma Cathedral does not only boast an interesting history, but also incredible masterpieces of art. At the center of the presbytery of the Cathedral, above the altar, opens for example the void of the great dome, which Correggio frescoed between 1526 and 1530 with the "Assumption of the Virgin", in which the delicate chiaroscuro cancel any effect of real space.

The great fresco, which has a surface of about 650 square meters, is rich in figures of angels and Apostles. Above it, there is a dense spiral of clouds that end in a dense tangle of angels, saints and patriarchs, arranged in several concentric circles. In the midst of these, it is recognizable the Madonna flanked by Adam and Eve and St. Joseph. At the center of the fresco, there is a large yellow light, the symbol of God's presence.

This pictorial composition was very audacious for its time and constituted the apex of the author's illusionistic research: the invention of a whirling upward motion in a glimpse of sky, suggested by the arrangement of the blessed and the clouds, was the basis on which many Baroque decorations were inspired a century later. But the clients did not like the idea at all, to the point that Correggio ended up abandoning the worksite.