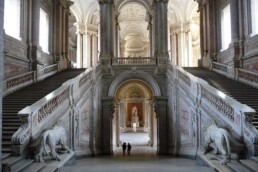 The Royal Palace of Caserta was born from the desire of the King of Naples Charles of Bourbon. The latter, caught up in a "competition" with the French royal family, wished to donate to Naples structures such as to be able to play the role of a city-capital of European level. And he decided to inaugurate a palace that could compete in magnificence and grandeur with that of Versailles.

The monarch chose the architect Luigi Vanvitelli, at that time engaged in the restoration of the Basilica of Loreto. And so he began to build what is now known as the Royal Palace of Caserta. Completed in 1845, the Royal Palace occupies an area of 47,000 square meters and, with over one million cubic meters, can boast of being the largest royal residence in the world by volume.

Now, there are many treasures kept here, but certainly one of the most important is the Royal Crib, set up in the Elliptical Room.
The tradition of the Christmas crib was inaugurated by Charles of Bourbon and then resumed by his successors. It was in particular Francis I, a true lover of crib figures, who turned out to be a great collector of shepherds. The basic structure, called "the rock", is made of cork and occupies an area of 40 square meters. On this are placed the 1200 figures according to strict rules and in compliance with the canonical scenes. The most important ones are made entirely of terracotta. While the minor ones are composed of a core of tow, supported by an iron wire, with only the head, hands and feet in terracotta.

What can be seen today in the Sala Ellittica, however, is a 1988 reconstruction of the majestic 1844 nativity scene commissioned by Ferdinand II. The original was tragically lost when it was stolen in 1985.
In addition to the traditional scenes of the Nativity with the Adoration of the Magi you can see other scenes. There is the Buffalo Pasture, the Stop at the Fountain, the Market and the Neapolitan Tavern with figures of musicians and patrons, useful for the reconstruction of daily life of the time.