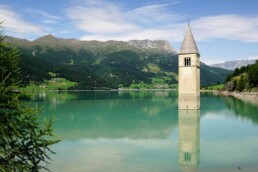 Among Italy's most attractive and famous sunken places, an honourable mention goes to Curon, one of the last Italian settlements in South Tyrol before the Austrian border.

This village is mainly known for its location along the Via Claudia Augusta and for its ancient bell tower rising out of the waters of the Reschen reservoir. The bell tower is, in fact, the only surviving building of the old village centre. Curon was completely and deliberately submerged by the waters of the lake in the 1950s.

The reason? There were once three natural lakes here. In addition to the Resia lake, there were the Curon and San Valentino alla Muta lakes. In 1950, it was decided to unify them by building a dam. The dam caused the old village of Curon to be completely submerged and relocated elsewhere. The dam cost around 25 billion lire and was the focus of the anger of the inhabitants, who even appealed to the Pope to prevent its construction. However, their attempts were in vain and the water invaded houses and cultivated land. A total of 677 hectares of land were affected, and the inhabitants and owners of the farms were expropriated and forced to leave their houses and land. It was decided to accommodate them in makeshift huts.

There are many mysteries and legends surrounding the bell tower. It still stands majestically and alone in the middle of the Reschen reservoir, making it a popular destination for tourists and the curious.

It is said that on cold winter nights the bells of the building can still be heard ringing.