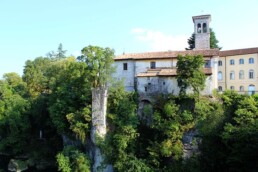 Devil's Bridge - The legend of Cividale

What is told in Cividale is an ancient legend, a dark story, the story of the Devil's Bridge.
It is said that in the Middle Ages the inhabitants of the town were desperate, since they could not find an architect capable of building a bridge that could join the two banks of the Natisone. Any structure that stood, in fact, simply collapsed.
A burgomaster, whose name nobody remembers anymore, however, decided to make a pact with the Devil himself. He pledged to build the bridge in one night, in exchange for the first soul to cross it.

That night the forces of nature were unleashed with thunder and lightning, all accompanied by terrible laughter that interrupted several times the sleep of the population.
As a result, at sunrise, the people of Cividale woke up and one by one they rushed to see the miracle: the bridge stood, solid and beautiful, beyond all expectations. But, there was someone waiting near the construction. It was someone with a sack, ready to take his rightful soul: the Devil.

Then the clerics and prelates came out of the Cathedral in procession, and singing sacred hymns, they reached the beginning of the bridge. At that point, silence fell.
And behold, a cat emerged from the crowd, with its shaggy fur: it trotted along the bridge and quickly ended up inside the Devil's sack. The Devil then realized he had been tricked and went on a rampage. He threatened to destroy the bridge, but in the meantime it had been blessed with holy water. Then there was nothing left for him to do but to sink into Hell, from whence he came.

The bridge is still there today, with its timeless charm.
Did you like this story? Discover more mysteries and legends on Secret Maps!