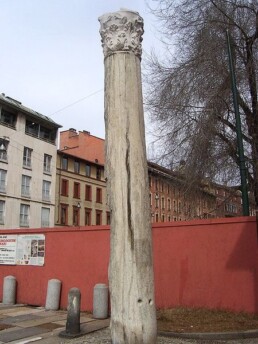 Basilica of Sant'Ambrogio - The Devil's Column

The Basilica of Sant'Ambrogio is one of the oldest churches in Milan, located in Piazza Sant'Ambrogio. Today it represents not only a monument of the early Christian and medieval period, but also a fundamental point of Milanese history and of the Ambrosian Church. The church was built between 379 and 386 at the behest of Bishop Ambrose himself. He dedicated it to the martyred saints buried there (i.e. the martyred saints Satiro, Vittore, Nabore, Vitale, Felice, Valeria, Gervasio and Protasio).

The building, however, is not only a place of worship, but also the precious guardian of many stories and legends, the most famous of which is that of the "Devil's Column".

Just outside the Basilica of Sant'Ambrogio, on its left side, there is in fact a column of Roman times. Legend has it that Saint Ambrose, Bishop of Milan in the 4th century, was struggling with the Devil's many attempts to tempt him. Exasperated by the continuous failures, Satan finally tried to pierce the Saint with his horns. But he missed the target and ended up sticking in the column. After having tried for a long time to free himself, he turned into sulfur and disappeared.

For this reason, according to tradition, when approaching the holes it would smell sulfur, while leaning on the ear it would be possible to hear the sound of Styx, the river of Hell. Disturbing detail: in the fourth century the area where now stands the basilica was a cemetery.
Did you like this curiosity? If you want to read more, about thousands of cities, download Secret Maps!