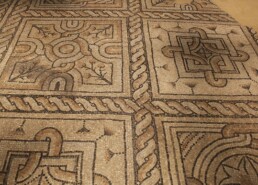 Ravenna - The Domus of the Stone Carpets

The Domus dei Tappeti di Pietra is one of the most incredible Italian archaeological sites discovered in the last decades. It all began in 1993 during the works for the construction of some underground garages in via D'Azeglio 47, in Ravenna. From the analyses carried out emerged a palace entirely decorated with wonderful mosaics and marble inlays, dating back to the Byzantine period. Inaugurated by the President of the Republic Carlo Azeglio Ciampi in October 2002, the Domus was awarded the Bell'Italia Prize 2004 and the Francovich Prize 2017.

The site is located inside the eighteenth-century Church of Santa Eufemia, in a vast underground environment located about 3 meters below street level, consisting of 14 rooms paved with polychrome mosaics and marbles belonging to a private Byzantine building of the fifth-sixth century.

Of particular interest and beauty, the mosaics are decorated with geometric, floral and figurative elements considered unique. This is the case of the "Dance of the Geni of the Four Seasons", a very rare representation that shows the Geni dancing in a circle, or the figure of the "Good Shepherd", portrayed in a different version from the usual Christian representation. He is in fact very young, with short hair. He wears a blue tunic with an orange cloth under his neck and shoes on his feet. In addition, he holds a stick with his left arm, and to his right and left appear two fawns. Behind the fawns are two trees as tall as the Good Shepherd, with two birds on the branches.

How did you like this curiosity? If you want to read more, about thousands of cities, download Secret Maps!