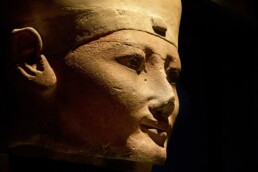 Egyptian Museum - The Tomb of Kha and Merit

The Egyptian Museum of Turin is the oldest museum in the world, entirely dedicated to the Nilotic civilisation. And it is considered, for value and quantity of the finds, the most important in the world after the one in Cairo.

The museum is dedicated exclusively to Egyptian art. Inside you can find mummies, papyri and everything related to ancient Egypt (including stuffed animals) for a total of more than 37,000 pieces covering the period from the Palaeolithic to the Coptic era.

There are many curiosities to be found in its halls. In addition to a real 'Book of the Dead', to which an entire wall is dedicated, and the Mensa Isiaca (an ancient bronze table of the Savoy family), there is also room for some special objects with a romantic story. An example? The Tomb of Kha and Merit.

The tomb of Kha and his wife Merit is one of the many treasures preserved in the Egyptian Museum. Discovered in what is now Luxor in 1906, it still tells a beautiful love story. Kha was in fact the architect who directed the maintenance work on the tombs in the Valley of the Kings. When his wife died prematurely, it is believed that he, in infinite despair, adapted his own sarcophagus for her, the only one that had already been completed, taking care that the body of his wife was comfortable in an oversized coffin and that her death mask was garnished with the most beautiful stones. When he too passed away, he was buried together with his beloved wife, to be united with her in eternity.

Did you like this story? Would you like to discover more curiosities about Turin or other cities? Look for them on Secret Maps!