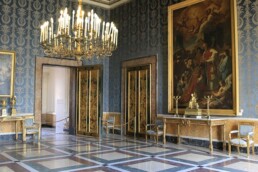 Today we want to talk to you about ghosts, Neapolitan ghosts, which are said to dwell in a famous building. The Royal Palace of Naples.

The Royal Palace of Naples is an ancient building located in Piazza del Plebiscito. It was the historical residence of the Spanish viceroys for over one hundred and fifty years, of the Bourbon dynasty from 1734 to 1861, and, following the Unification of Italy, of the Savoy.

The palace was built starting from 1600, to reach its final appearance in 1858. It is centuries and centuries of history, in whose folds lurk many curiosities. Like many ancient buildings, in fact, this building also boasts its legends and especially its ghosts. There are two ghosts in particular that are said to dwell in its rooms.

The first ghost, which is probably the most famous one, seems to be that of Maria Carolina di Borbone, wife of Ferdinand II of Naples. She used to give sumptuous banquets in the halls of the Royal Palace, and it seems she never wanted to leave these halls. It is said that on certain nights strange voices, whispers and whisperings are heard.
The second ghost, that someone claims to have seen entering and leaving the Royal Palace, would be that of Father Rocco. This was a Dominican monk who lived in the 1700's, whose wax statue can be seen at the museum of San Martino.

Father Rocco wore the Dominican habit with the name of Gregory, living for sixty-four years in the Convent of the Holy Spirit of the Palace and doing his best for orphans, the unemployed and street children. Esteemed and respected by the people, he was also well-liked by the sovereigns, and for this reason he freely entered the Royal Palace and was even militarily greeted by the sentries.