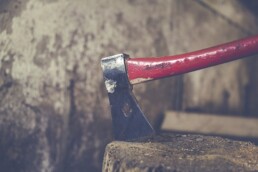 The peculiarity of Via Bagnera? Undoubtedly that of being the narrowest and blackest street in the city of Milan. But what not everyone knows is that it was the scene of true noir meneghini.

Antonio Boggia was born in Urio (Como) in 1799. He was an unsuspected man, of calm, almost good-natured manners, observant of religious practices, extraneous, at least apparently, from vicious tendencies. It also seems that he was a polyglot and thanks to his knowledge of German, he found a job at Palazzo Cusani, the seat of the Austrian military command, as a fochista.

No one could have ever imagined that he would become the "monster of Milan", the first Italian serial killer.
Boggia began to kill in April 1849, and his first victim was Angelo Ribbone, robbed of 1,400 svanziche. His body ended up dismembered and hidden in a basement in Via Bagnera, used by Boggia as a warehouse and office.
Then it was the turn of Giovanni Comi, an elderly accountant. Attracted in the same warehouse, he was hit with an axe, but managed to escape. The police arrested Boggia, who ended up being locked up in the Senavra asylum. He was released after a few years.

Reports of missing men or women who had become untraceable soon began to pile up.
But a new inspection in the cellar of the building in Via Bagnera led to the discovery of four more bodies, four victims abandoned and left to rot. Four people of whom Boggia had gained the trust and from whom he had been delegated to manage their assets. Hence the Milanese saying "fa minga el bogia", which is used to say of those who are falsely kind in order to gain the trust of his victims.

Judged, he was sentenced to death and hanged on April 8, 1862. Near the bastions of Porta Ludovica and Porta Vigentina. This was the last death sentence of a civilian executed in Milan until the Second World War.
Legend has it that his spirit still hovers in the narrow Via Bagnera, somehow anchored forever in the place of his misdeeds.