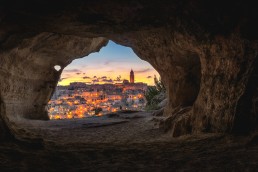 Matera - The Crypt of the Original Sin

The Crypt of the Original Sin is a cave-church of Matera discovered in 1963 at Masseria Dragone. It is an absolutely unique place in the world, which for the wonder of the frescoes made, is considered the "Sistine Chapel of the cave".
The Crypt, dug into the rock along the wall of the Gravina di Picciano, rose in the period between the eighth and ninth century. Probably, the cenoby belonged to the Benedictine order, as evidenced by some elements that characterize the cycle of frescoes inside. The crypt has been called for centuries Grotta dei Cento Santi (Cave of the Hundred Saints) because it is completely covered with paintings. The painting is clearly Lombard, with few references to Byzantine art, due to the arrival in Italy in the period of Eastern popes, and Roman painting. This is clear from the simple drawing line, the rich clothes and the expressive faces.

Among the frescoes, a large panel of Genesis is particularly striking. It is a splendid figurative Bible capable of describing the sacred scriptures to the many illiterate faithful. This panel shows scenes from the Old Testament, in particular the Creation and Original Sin, to which the church owes its name. The back wall recounts some of the episodes: the Creation of Adam and Eve, Eve tempted by the serpent, Eve offering the forbidden fruit to Adam. The left wall is enlivened by three niches. Here there are depictions of the triarchy of the Apostles, the Virgin Queen and the Archangels.

After years of desolating abandonment, the rock church has been restored and it is possible to visit it after booking.