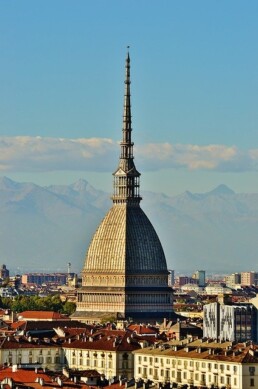 Mole Antonelliana - The legend of the Grail

The Mole Antonelliana is a monumental building whose shape is particular and unique, the result of a daring and unique 19th century eclectic architectural technique, typical of the style of Alessandro Antonelli, the architect who conceived it and to whom it owes its adjective.

What not everyone knows is that the Mole Antonelliana was built to be an Israelite temple. In 1862, the Jewish community of Turin bought the land in the area called, at the time, the "Contrada del cannon d'oro" (the current Via Montebello). The idea was to build a new temple, with an adjoining school. The community chose as architect Alessandro Antonelli.

Alessandro Antonelli, however, proposed a series of changes in progress, which provided for the raising of the building to 113 meters. Well beyond the 47 meters initially proposed for the dome alone. The structural problems, the unstable ground and the growing economic difficulties, induced in 1873 the Jewish community to barter the work with the City of Turin.

Is that all? Certainly not! Because there is an ancient legend about the Mole Antonelliana that would even link it to the Holy Grail.

The famous statue of the Faith, in front of the Church of the Great Mother, in the past probably had its eyes pointed in the direction of the Mole. Even if unfortunately, today the pupils are no longer visible, so it is difficult to establish with certainty. According to legend, however, the statue would look in the direction of the place where the Holy Grail should be hidden.