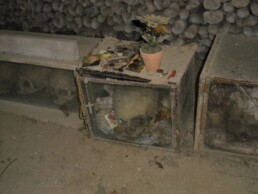 The Cemetery of Fontanelle is one of the most fascinating places in Naples, a corner of Sanità full of stories, legends and curiosities that are just waiting to be discovered.

This cemetery, which covers more than 3000 square meters, contains the remains of an unknown number of people. The place is well known because here in the past took place the rite of the "anime pezzentelle". This was the adoption and care by a Neapolitan of a certain skull of an abandoned soul (called "capuzzella") in exchange for protection.

Each of the thousands of skulls piled up here has its own story and its devotees, but among them there is one that is a real celebrity: the Captain's skull, the most famous skull among those adopted by Neapolitans as their personal saints.

There are many stories and legends about this skull. The best known legend says that one day a girl and her fiancé, who were to be married, came to the cemetery. The young girl began to pray while the boy took to pierce the orbit of the Captain's skull. "I do not fear you, and indeed I invite you to my wedding!" said the young man taunting the skull.

But on the day of the wedding, at the wedding banquet, a strange individual wrapped in a black cloak showed up. Being a disturbing presence, the groom approached him to ask who he was.
"And you ask me?" said the individual, "You of all people who invited me to the wedding?" And that said, he uncovered the body, exhibiting the skull and bones. At that sight both the bride and groom died.
Did you like this curiosity? If you want to find out more, about thousands of cities, download our app!