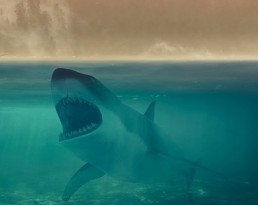 The Natural History Museum of Trieste was founded in 1846 at the behest and expense of private citizens, who founded a Society for the study of Natural History, with particular interest in the fauna of the Adriatic Sea.

This museum owes its fame above all to its collection of important exhibits that are unique in the world. The Antonio dinosaur (Tethyshadros insularis) is the largest and most complete dinosaur in Italy and the most important palaeontological discovery in Europe. Carlotta is also a big attraction. She is a 5.4-metre-long white shark caught at the beginning of the 20th century in Kvarner. It is the largest preserved carnivorous shark in the world and has a fascinating history.

There was a time, not too long ago in fact, when the stretch of sea between the Gulf of Trieste and Dalmatia was populated by "Carcharodon carcharias", the great white shark. In 1872, the authorities established a compensation of: twenty florins for catches less than one metre long; thirty for specimens from one to four metres; and one hundred florins if the shark exceeded the size of four metres. On 29 May 1906, Captain Antonio Morin, a navigating commissioner of the Imperial-Regia Guardia di Finanza, caught a great white shark while sailing the Adriatic between Istria and present-day Croatia on board the propeller steamer 'Quarnero'.

The terms of the capture remain mysterious, but even today gunshot holes can be seen on the shark's back. The whole shark - named Carlotta by Morin, in honour of his daughter - was donated to the then Civic Museum Ferdinando Massimiliano (today our Civic Museum of Natural History of Trieste) where it was embalmed entirely, with a daring procedure that lasted many days and "stunk up the whole Piazza Lipsia" (today Piazza Hortis) where the Museum was located.

Enjoying this curiosity? If you want to discover the secrets, legends and museums of Italy, download the curiosity app. Download Secret Maps!