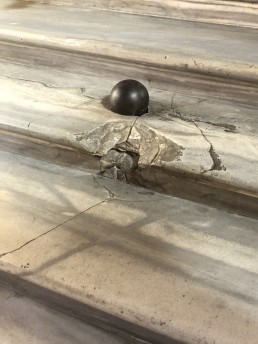 Palazzo Colonna is one of the largest and oldest private palaces in Rome. It occupies the block between Piazza Santi Apostoli, Via Ventiquattro Maggio, Via Quattro Novembre and Piazza della Pilotta. It extends over an area where buildings, houses, and fortresses belonging to the counts of Tusculum are already documented before the year 1000.

Its construction began in the 14th century at the behest of the Colonna family (who have been permanent residents there for eight centuries) and continued for about five centuries. This resulted in the superimposition of different architectural styles, exterior and interior, that characterise it and reflect the different eras.

The construction of the splendid and majestic Colonna Gallery dates back to the 17th century, overlooking Via IV Novembre for 76 metres; an authentic jewel of Roman Baroque, it is now open to the public, with the most representative and artistically valuable flats of the Palace, which house the family's Art Collections, notified and bound by the fideicommissum of 1800, where one can admire masterpieces of absolute excellence by the major Italian and foreign artists between the 15th and 16th centuries.

As with so many places in Rome, there is of course no shortage of curiosities. And one of these can be found on the short flight of stairs leading down to the Great Hall. Here you can in fact admire an authentic cannonball. But what is a cannonball doing here? It arrived exactly here in 1849, during the time of the Roman Republic. It was fired from the Janiculum Hill by the French army, under the orders of General Oudinot, who had entered through Porta San Pancrazio and come to the rescue of Pope Pius IX from the Republican insurgents, including Mazzini, Armellini and Saffi, who occupied the centre of Rome for a few months. And it has not moved since then.