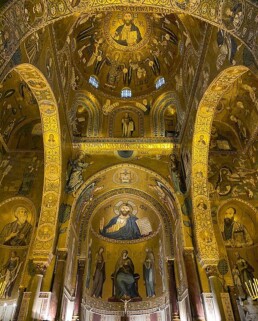 The Palatine Chapel is a basilica located inside the Norman Palace in Palermo. It was commissioned by Roger II of Altavilla, the first Norman king of Sicily. It is a treasure of inestimable beauty, recognized as a UNESCO World Heritage Site.

If the first impression is that of entering a normal Christian church, looking more carefully at its structure is possible to recognize two small churches. To the west you see a Latin church divided by ten columns. To the east (in the presbytery) one recognizes instead a small Eastern Christian church, that is Byzantine, with a square plan surmounted by a hemispherical dome. Even the inscriptions on the walls are both in Latin and Greek. This testifies to the fact that, in this small chapel, at the time of Roger II, the two religious components were counterbalanced and that the rite was "officiated" in both languages.
On the walls you can find wonderful Byzantine mosaics. They are formed by two sheets of glass between which there is a very thin layer of gold.

Unique in the world and of considerable importance and value is the ceiling. It is a ceiling "fatimita a muquarnas" which means stalactites or alveoli. Here you can admire 750 paintings representing the Koranic paradise. There are trees, monsters, peacocks, eagles; men squatting with their legs crossed in the Muslim way, generally in the act of drinking, or hunting. All these scenes belong to Islamic secular iconography, whose images symbolically represented the wish for a happy life after death.

A special mention should be made of the monolithic candelabrum four meters and twenty-six centimeters high placed on the right next to the ambo. Still used today on Easter Sunday, it is divided into five orders and rests on four lions. The lions, which are the symbol of the Normans, bite men and beasts. At the center of the work, Christ, depicted with a beard, immediately stands out. He sits on a cushion and holds a book in his hand. At his feet you can see the figure of a man dressed as an ecclesiastic, probably Roger II, who commissioned the work.

Did you like this curiosity? If you want to discover more secrets, legends and mysteries of Italy, download Secret Maps! 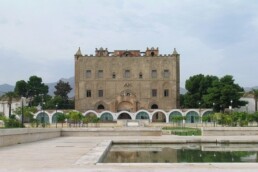 Zisa Castle - The legend of the Devils

The Zisa Castle has a name which derives from the Arabic "al-Aziz", which means "glorious", "magnificent". It is a building erected outside the walls of the city of Palermo, within the Norman royal park. The castle is a construction that dates back to the twelfth century, the period of Norman rule in Sicily.

Commissioned by King William I of Altavilla to make it his summer residence, it was built by Arab architects. The influence of the previous domination, in fact, was still very strong. As a result, the Normans, fascinated by Islamic culture, followed the style.

In the castle of the Zisa still lives a legend, the "legend of the Devils", known to the most with the name of "Devils of the Zisa". Inside the palace there is in fact a fresco composed by a remarkable quantity of mythological figures, whose number is still undetermined. The puzzle derives from the fact that counting the figures of the fresco, is often difficult because you are forced to make a turn on themselves with the head up and therefore happen to lose the account.

The legend wants at the center of this nice mystery, a golden treasure, placed somewhere inside the building and visible only to the one who will be able to count the figures on the fresco.
Did you like these kind of curiosities? If you want to read more, download Secret Maps!