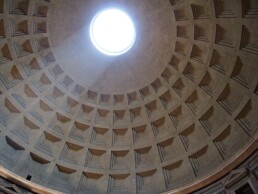 Rome - The oculus of the Pantheon

The Pantheon is a famous building of ancient Rome located in the Pigna district, erected as a temple dedicated to all the gods past, present and future. Built in 27 BC by Marcus Vipsanius Agrippa, son-in-law of Augustus, it was later rebuilt by Emperor Hadrian between 120 and 124 AD. In fact, the fires of 80 and 110 AD damaged the previous construction.

The building is composed of a circular structure joined to a portico of Corinthian columns supporting a pediment. Since the end of the 7th century it has been a Christian basilica dedicated to Santa Maria della Rotonda. This metamorphosis has allowed it to survive the spoliation inflicted by the popes over the centuries.

The Pantheon is famous for having a single oculus-shaped window on the dome of almost 9 meters in diameter. From a technical point of view, this opening to the outside allows the light to fall from above and therefore a clever play of chiaroscuro inside.

Around the oculus of the Pantheon many legends, astrological studies and curiosities have arisen over the centuries. According to a medieval legend it was created by the devil escaping from the temple of God. In ancient times it was said that the rain could not enter the temple because of the heat and smoke of the candles that illuminated the interior. Today this remains only a legend. In the Pantheon on rainy days still enters abundant water. For this reason, the floor has 22 holes. This is to allow the rain to filter through.

Thanks to the presence of the oculus, however, curious astronomical phenomena can be observed inside the building, so much so that someone called it "a solar temple". For example, on April 21st, Christmas of Rome, at noon, a ray of sunlight penetrates from the oculus inside and hits the access portal.