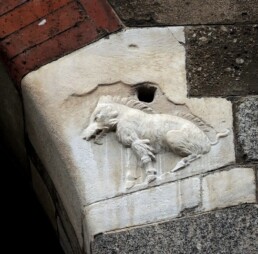 Piazza Mercanti is a square in Milan that was created in the middle of the thirteenth century. Initially conceived as the center of city life in medieval times, it was later transformed into Via Mercanti. And today it is one of the busiest areas of the city. Its location is simple. In fact, in everyday language, Piazza Mercanti means the square surrounded by the Palazzo della Ragione, the Casa dei Panigarola and the Loggia degli Osii.

Now, even this well known square in the center of Milan hides its little secret, a little curiosity: the semi-lute sow.
The half-mouthed sow is a mythological animal, the symbol of the city of Milan until the Middle Ages, when the Visconti family replaced it with the famous biscione. According to legend, the founder of Milan, the Celt Belloveso, crossed the Alps and the territory of the Edui to reach the Po Valley. Belloveso saw in the place indicated by a goddess in a dream, a wild boar sow that had the peculiarity of having a very long hair on the front part of the body (semi-long sow).

In memory of this legend, and the dedication of the city of Milan to this sow, you can see, in Piazza Mercanti, a bas-relief depicting the animal, on a capital of the Palazzo della Ragione. The same animal is depicted in a coat of arms in the inner court of Palazzo Marino.