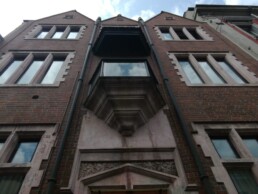 Milan is a city that is not easily discovered, but whose hidden soul can be discovered among its narrow streets and gardens. Still today, incredibly, there is an unusual and secret Milan, which holds hidden gems capable of arousing curiosity and wonder. Among the strangest buildings that characterize the city, there is a very special one. It is house 770, also known as the "rabbi's house".

To find it, just go in front of number 35 of via Poerio, in Porta Venezia. The sensation you might experience is that of feeling very confused when you suddenly think you have ended up in the streets of Amsterdam. House 770 is in fact a building with an obvious Dutch reference. It was Rabbi Yoseph Yitzchok Schneerson who had it built. Then, forced to flee Nazi Germany, he had an identical house built in New York, right at East Parkway 770.

Later, the New York home at 770 became the home of Rabbi Menachem Mendel Schneerson, another prominent figure in the Jewish community. Schneerson helped make the home worthy of praise, almost a place of worship and pilgrimage. It was also a way for his followers to pay homage to him and to make known to the world their devotion to his important figure. The rabbi in fact dedicated his life to the spread of the teachings of Judaism.

Over time, the house became a true symbol for the Jewish community of Lubavitcher. To the point that it was decided to replicate the architecture around the world. The 770 houses are present in the United States, in New York, New Jersey, Cleveland and also in Los Angeles. They are also found in Canada in Montreal, in Israel in Ramat Shlomo in Kfar Chabad, Kfar Tapuach, Kiryat Ata and Zikhron Ya'aquov, locations located near Tel Aviv and Haifa. Others are in Sao Paulo, Buenos Aires, Melbourne, Santiago de Chile and also in Ukraine. The one in Milan is the only one in Europe, while the other copies are scattered around the world among the United States, Israel, Argentina, Australia, Canada and Brazil.
Did you like this curiosity? If you want to read more, about thousands of cities, download Secret Maps!