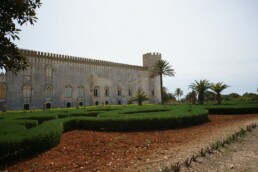 The castle of Donnafugata is located in the territory of the municipality of Ragusa. The current building, contrary to what the name might suggest, is a sumptuous aristocratic residence of the late '800. Although in reality, the first construction seems to be due to the Chiaramonte, Counts of Modica in the fourteenth century.

The castle, divided into three floors, has over 120 rooms of which twenty are now accessible to visitors. Visiting the rooms that still contain the original furnishings and furniture of the time, it seems almost to take a step back in time. In the era of the last "gattopardi".

There are various hypotheses about the origin of the name of the castle of Donnafugata. Legend has it that Princess Bianca of Navarra was imprisoned by Count Bernardo Cabrera, lord of the County of Modica, but managed to escape through the tunnels leading into the countryside surrounding the palace. From this would later derive the term "Donnafugata". In reality the construction of the castle is subsequent to the legend.

According to another interpretation the name of the castle is the free transcription of the Arabic term "ʻAyn al-Ṣiḥḥat" (Source of Health), which in Sicilian became "Ronnafuata", from which the current name. But it is possible to advance a further hypothesis, that is, that the name of the place may refer to a tragic and painful episode occurred in this place. That is the possible finding, in an unspecified historical moment, of a female body died of suffocation. Hence "donna affucata", that is "suffocated woman" or "woman died of suffocation".