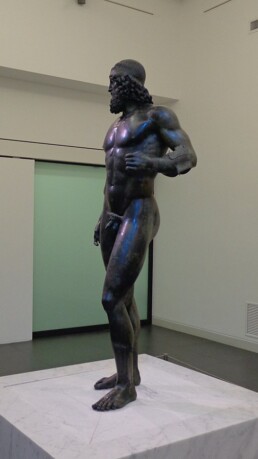 National Archaeological Museum of Reggio Calabria - Among the Riace Bronzes

In the aftermath of the 1908 earthquake, the idea of creating a large museum in Reggio Calabria was born. A museum entirely dedicated to Magna Graecia. Thus was born the National Archaeological Museum of Reggio Calabria.

The new permanent exhibition now has 220 display cases and is spread over four levels. These tell the story of human settlement in Calabria from prehistory to Romanization. All according to a chronological and thematic criterion.

The visit begins on the second floor, from prehistory and protohistory. It continues on the second floor among the cities and sanctuaries of Magna Grecia. Follow the mezzanine with its Necropolis, and finally the ground floor. The basement is reserved for temporary exhibitions. There is also the lapidary and a small archaeological area related to a strip of the necropolis found in 1932.

On the ground floor, since 1981, there is a special section. It houses the famous Bronzes. They are kept together with the so-called Head of the Philosopher and the Head of Basel.

The Riace Bronzes are considered among the most significant examples of classical Greek art. These are two bronze statues depicting two naked men. Originally armed with shield and spear, they are the symbol of the city of Reggio Calabria. Found in 1972, near Riace Marina, they were discovered during a dive. The hypotheses on the origin, the dating and the authors of the statues are different. They probably date back to the middle of the fifth century BC and it is assumed that they were thrown into the sea during a storm to lighten the ship that carried them. Or, that simply the boat sank.

These are the most famous finds in the world, but they are not the only precious examples of Calabrian history. At the National Archaeological Museum of Reggio Calabria, in fact, there are exhibits related to a wide chronological span. Some of them are unique for their beauty, majesty or state of preservation.