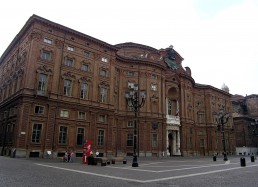 National Museum of the Italian Risorgimento - A Unique Room

One of the most surprising museums in Turin is undoubtedly the National Museum of the Italian Risorgimento. It is the oldest and most important museum dedicated to the Italian Risorgimento because of the richness and representativeness of its collections. It is the only one that can officially boast the title of "national". Founded in 1878, it is located in Turin in the historic Palazzo Carignano.

The exhibits on display in the museum, which can be attributed to a wider historical period, date from 1706 (the year of the siege of Turin) to 1946 (the birth of the Italian Republic) with particular attention, as already mentioned, to the relics of the Risorgimento, which are linked to a period of time between the end of the 18th century and the beginning of the First World War.

Very varied is the typology of the exhibits: arms, standards, uniforms, printed documents and manuscripts, and figurative works. The place of honour is undoubtedly represented by the Chamber of Deputies of the Subalpine Parliament, a national monument since 1898 and the only original example in the world of the parliamentary halls established after the revolutions of 1848. In this hall, which is used for the museum's temporary exhibitions and cultural events, there are large paintings depicting Italian military history from 1848 to 1860, which is recounted both by the events linked to the official army and the events linked to the epic of Garibaldi's volunteers.

The National Museum of the Italian Risorgimento attracts thousands of visitors every year. In 2016 alone, it was visited by around 150,000 people.