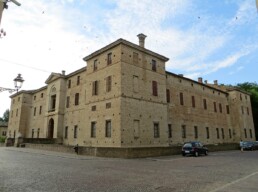 The Rocca Meli Lupi is a medieval manor house rebuilt by Bonifacio and Antonio Lupi in 1385. It is a historical residence, enriched over time with countless works of art and priceless testimonies of the past, it has always remained the property of the Princes Meli Lupi who still live there.

The Rocca preserves fresco decorations and pictorial cycles by Nicola dell'Abate, Cesare Baglione, Ferdinando and Francesco Galli Bibiena. Grotesques and frescoes along sumptuous galleries and corridors of mirrors are signed by famous artists. The Throne Room and the Bridal Chamber are splendid, as well as the furnishings.

Like all self-respecting castles, Rocca Meli Lupi also boasts its own ghost, that of Cassandra Marinoni, better known as Donna Cenerina.

This woman, in 1548, married Diofebo II Meli Lupi, Marquis of Soragna, in Cassano d'Adda. During the absences of her husband, who followed Ottavio and Alessandro Farnese in many military enterprises, she administered the small feud in the Po Valley, where she welcomed her sister Lucrezia, who in 1560 had married Count Giulio Anguissola, a violent and mean man who had dissipated the family's assets and, after the separation from the woman, meditated to kill her to take possession of her inheritance.

On June 18, 1573 Anguissola appeared with a group of armed men in Cremona where Lucrezia was and, managed to enter with the deception, killed her with stab wounds hitting also Cassandra who had gone to visit her. Seriously injured, the next day the marquise was taken to Soragna where she died.

Legend has it that the ghost of Donna Cenerina still appears today in ash colored clothes. Hence the nickname of "Donna Cenerina".