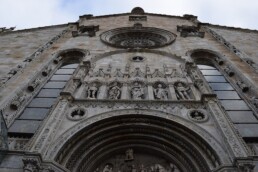 The Cathedral of Cremona is a beautiful church dedicated to Santa Maria Assunta, the main place of Catholic worship in the city. It is a vast Romanesque temple continually adapted with Gothic, Renaissance and Baroque elements, dating back to the 12th century.

Inside the building there are many interesting artistic pieces, such as the Great Altar Cross in silver and finished in gold, or the cycle of the "Stories of the Virgin" by Boccaccino, Bembo and Melone, who took turns to paint each one some episodes of Mary's life.

The Duomo also holds some curiosities, which, if a visitor does not know where to look for them, would probably go unnoticed. The most interesting one is in the left transept of the Cathedral, right next to the chapel of the Madonna del Popolo.

Here you can admire the original fresco of St. Michael under the altar of the same name. It is not always visible, it is often covered by another canvas placed in later years. But if luck is on your side you can see a rather curious representation of St. Michael holding a scale in his hand. The archangel is depicted as he is in the process of weighing the souls of the deceased, to decide whether to send them to hell or not. This particular representation of psychostasis (weighing of souls) is characteristic of ancient Egypt, where this rite is often depicted in the pyramids of the pharaohs: Osiris, instead of St. Michael, weighs the heart of the deceased to see if it is more or less heavy than a feather.
Did you like this curiosity? If you want to discover others, look for them on Secret Maps!