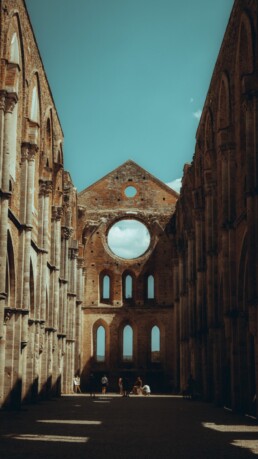 Abbey of San Galgano - The Sword in the Stone

The Abbey of San Galgano is a Cistercian abbey, located about thirty kilometres from Siena, in the municipality of Chiusdino. This enchanted place, one of the most suggestive on the itineraries of Tuscan spirituality, has become famous over time for a famous legend.

Two hundred metres from the abbey is the chapel of Montesiepi, also known as the 'round' because of the circular shape of its central structure. Confined in a rock a couple of metres from the altar is an old iron sword, placed here by Saint Galgano.

Galgano Guidotti (although there is some doubt about the surname) is a real personage, born in 1148 in Chiusdino and died in 1181, as attested by documents that still exist. He decided to drive his sword into the rock, after a life of debauchery, as a powerful gesture of conversion. According to the acts of the beatification process, which record the testimony of the saint's mother, Dionigia, when Galgano went to Rome on a visit to Pope Alexander III, envious people went to the hermitage of Montesiepi and tried in every way to pull the sword out of the rock. Not succeeding, they broke it. Then, on the saint's return, by a miracle, the sword was restored.