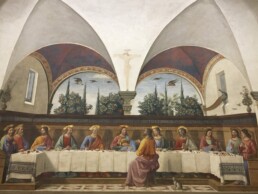 The San Marco Museum is a Florentine museum located in the monumental part of an ancient Dominican convent. The fame of the museum, whose architecture is a Renaissance masterpiece, is due mainly to the presence of works by Beato Angelico, present in many rooms of the convent.

In the refectory of the guest quarters, another small treasure is preserved: the Cenacolo di San Marco. Frescoed in 1486, it is universally attributed to Domenico Ghirlandaio. In reality, the artist was at that time at the height of his popularity and full of commissions. Therefore it is believed that he only prepared the drawing, delegating the pictorial realization mainly to his brother Davide and to his brother-in-law Sebastiano Mainardi.

The representation appears serious and monumental, with the characters composed. This aspect makes us think that Ghirlandaio wanted to represent the moment after the announcement of the betrayal. With Judas, always from behind, who already has in his hand the piece of bread offered to him by Jesus and the agitation of the apostles already calmer. Judas has his arm raised in the obvious gesture of dipping the piece of bread into Christ's plate, derived from the Gospel story. And he has a cat near him, a negative symbol.

On the table are lined up glass bottles with water and wine, glasses, cups, knives, bread, cheese and various fruits. Among these are mainly cherries, which with their red color symbolically recall the blood of the Passion.
Behind the figures is a garden with fruit trees, cypresses and a palm tree, a symbol of martyrdom. Among the birds in flight there are two couples flying together, a symbol of the natural cycles that are renewed, and a peacock, a symbol of immortality.

Finally, the inscription on the backrest above the heads of the apostles is curious: "Ego dispono vobis sicut disposuit mihi pater meus regnum ut edatis et bibatis super mensa meam in regno meo". It means: "I prepare the kingdom for you as my father prepared it for me so that you may eat and drink at my table in my kingdom". This is a phrase also used during Mass, which alludes to the transmigration into the Kingdom of Heaven.

Did you like this trivia? If you want to read more, about thousands of cities, download Secret Maps!