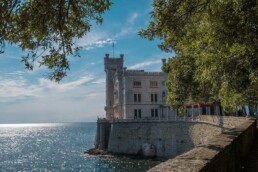 The Castle of Miramare and its park were built at the behest of Archduke Maximilian of Habsburg. In 1855, he decided to build a residence on the outskirts of Trieste overlooking the sea and surrounded by a large park. The building was designed by the Austrian engineer Carl Junker who chose an eclectic style as dictated the architectural fashion of the time. For this reason, in the building, models taken from the Gothic, Medieval and Renaissance periods come together to create a wonderful fusion.

Miramare Castle became famous when Elizabeth of Austria, the famous Princess Sissi, chose it as her summer residence. Elizabeth deeply loved the city of Trieste, not so much for the beauty of its historic center. Nor for the proverbial reserve of its inhabitants, but because it was the port from which she set sail for those longed-for journeys that took her away from Vienna. She arrived there for the first time on November 21, 1856, the first leg of a long official journey that took the imperial couple to the Italian provinces.

During her stays in Trieste, Elisabeth loved to stay at the castle of Miramare, where she was a guest of her brother-in-law Maximilian. Of the castle she loved the large windows overlooking the open sea. After Maximilian's execution in Mexico, Elisabeth often returned to the castle, using it as a "base" for many incognito excursions in the city or in the nearby bays. She particularly liked the one overlooked by the castle of Duino. In September 1882 she arrived in Trieste for an official visit: the residence was still Miramare, where for that occasion the lights of the party returned to shine after a long time.