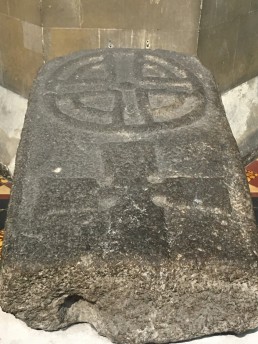 Today we take you to Dublin, inside a very special place: St Patrick's Cathedral, one of the two Protestant cathedrals under the auspices of the Church of Ireland in Dublin, and more precisely the larger one. It houses an ancient artefact: St Patrick's stone.

But who exactly was this saint?

Most of what we know about St Patrick's life comes from his own words. All written in ancient documents called 'Confesto' and 'Epistola'. He was born in Roman Britain and at the age of 16 was captured by Irish raiders travelling along the west coast of Britain. He did not see his family for about six years. And it was during his enslavement that he found God, praying every day for strength and hope. Once freed, he became a missionary, dedicating his life to bringing Christianity to the pagan population of Ireland.

According to local legend, St Patrick used a well, right where the cathedral dedicated to him now stands, some 1500 years ago to baptise converts. Today, an ancient early Christian tombstone, discovered in 1901, can be seen in the church. It covers the remains of an ancient well that may have been the same one used by St Patrick.

The stone was found near the entrance to what is now St Patrick's Park, next to the cathedral. As many as six slabs like this one were found in 1901, while the park was under construction. These slabs are over a thousand years old and were probably used as burial markers on the site of a church that stood here before the cathedral was built.

Enjoying this curiosity? If you want to read more legends from around the world, download Secret Maps!