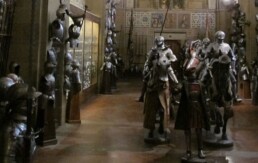 The Stibbert Museum in Florence was born from the collections of Frederick Stibbert. This Englishman, whose mother was Tuscan, restored and enlarged the small Villa Montughi here at the end of the 19th century, creating the sumptuous family villa. Having enriched himself with the railway business in his English motherland, Stibbert then settled in Florence. Upon his death, he donated the villa, the park connected to it and the collections kept there to the city, thus creating an important foundation that opened the house to the public.

Currently the entire collection consists of over 36,000 inventory numbers (for about fifty thousand objects). For the most part they are all exhibits, the result of the original nucleus left by Stibbert at his death but increased by various gifts and later purchases. In the museum are exposed ancient weapons, along with art objects. The most impressive section, however, is certainly that of armor. Absolutely unique for wealth, internationality and scenograficità of the exposure. It boasts almost 16,000 pieces from various eras, mostly from central Europe.

Among the various museum collections there is also the Japanese one, the largest in the world outside Japan.

The three rooms that house the Japanese Armory were originally designed to house medieval European materials. But already around 1880 Stibbert began to take an interest in Far Eastern armaments, coinciding with Japan's reopening to external markets after 1868. The collection has about 95 complete suits of armor, 200 helmets, 285 short and long swords and weapons in auction, 880 tsuba (the guards of the sabers) as well as accessories all of great quality and workmanship.

The objects are located almost all between the Momoyama period and the Edo period (from 1568 to 1868). Some, however, are earlier, to be placed in the second half of the fourteenth century.