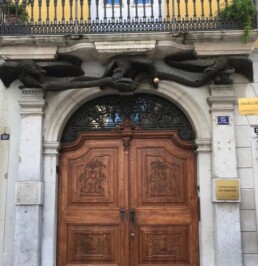 Trieste - The House of bisse

Today we take you to know one of the most curious buildings of the enchanting city of Trieste. You can easily find it by walking along Via San Lazzaro, behind Piazza Sant'Antonio, until you reach number 15. Here, in 1771, was built on a project by the architect Bubolini the beautiful Casa Allodi, which later became known as "House of bisse".

The House of bisse is a building in neoclassical style with elements of French rococo. This building has undergone subsequent interventions and the current appearance does not reflect the original idea at all. The two cast metal balconies, for example, undoubtedly date back to the mid-800. In addition, the building had initially only two floors, only later was added the third and then the attic.

One of the peculiarities of the building that jumps immediately to the eye, is the sculptural complex above the door. This snake represents Napoleon, defeated in the Battle of Leipzig in 1813 (the year in which it was affixed), and the eagles are the three victorious nations, Austria, Prussia and Russia, while the golden ball represents the world that Napoleon's armies until then victorious seemed to conquer.

A second peculiarity of the House of bisse is inserted in the carving of the wood of the door. The French troops arrived in the city on several occasions and during one of these occupations the Napoleonic eagle was carved here.
The third peculiarity is found inside the door, where a cannon ball is embedded in a wall with a plaque that reads: "Hoc me ornamento galli affecerunt MDCCIX". It is possible that in 1813 during the fighting between the Castle of San Giusto in the hands of the French and the center occupied by the Austrians, some shot has come here, but without really hit the house and in any case not in 1809.
Did you like this curiosity? If you want to discover more, look for them on Secret Maps! 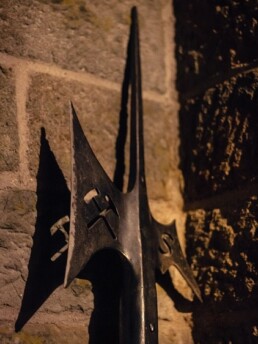 The story of the halberd of St. Sergius, symbol of Trieste, is one of the most ancient legends about the city, always linked to its Cathedral.
The Cathedral of Trieste is a building dedicated to Saint Just. Just was a Roman soldier who converted to Christianity and, besides refusing to kill Christians, disobeyed Diocletian's order to bow down before pagan idols. For this he ended up at the bottom of the sea with a weight on his feet.

According to tradition, however, the ropes came loose and his body was carried by the waves to the shores of Trieste. In the same night he appeared in a dream to a Christian asking him to give him a burial. The next morning, the believer went to the place indicated in the dream. So, he found the body, embalmed it, wrapped it in a linen sheet and buried it.

However, Trieste Cathedral is also linked to another saint: Saint Sergius. Sergius was a military tribune, member of the XV Apollinaris Legion. This soldier decided to embrace Christianity during a trip to Trieste. His conversion, however, soon became public. He was summoned back to court and was quickly sentenced to death.

After that, before leaving, Sergius made a promise. He promised his Christian friends in Trieste that a sign would come to the city to announce his end.

It is said that his martyrdom was atrocious.. According to the chronicles of the time, the Roman soldiers drove nails into his feet. Therefore, they forced him to walk through the Castrum of Saura, Tetrapirgio and Rosapha where he was presumably beheaded on October 7.

Legend has it, however, that at the very moment he died, on that sad day, a halberd suddenly fell from the clear sky above the Forum of Trieste. That halberd, which today is kept among the treasures of the Cathedral of San Giusto, became the very symbol of the city in honor of the late Sergio.
Did you like this ancient legend? Read another one and then download Secret Maps!