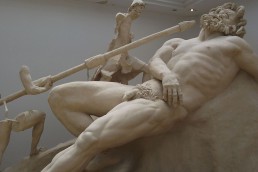 The Ulysses Riviera, the famous stretch of coastline in the province of Latina, has always been linked to Homeric tales. According to legend, in fact, Ulysses stopped here for a long time, a prisoner of the sorceress Circe. Today, however, this area is also known for another reason: the presence of the Sperlonga Archaeological Museum.

The Archaeological Museum of Sperlonga boasts a curious history. It all began in the 1960s, during some work along the Via Flacca, when the remains of a Roman villa emerged. The building turned out to have belonged to the Emperor Tiberius, who used to frequent the area. Thanks to the efforts of the inhabitants of Sperlonga, the precious artefacts and materials were kept in situ. And in 1963, the Archaeological Museum of Sperlonga and the Villa of Tiberius was born.

During the Augustan age, Greek mythology had aroused enormous fascination among the leading figures of high society. Therefore, Tiberius had decided to adorn his residence with precious marble statues recalling some of the most popular episodes. Today, those statues form the core of the museum exhibition. Thus, there is the sculptural group of Polyphemus, the group of Scylla, the Palladian Rape, the Pasquin. But also Ganymede and the statues of Circe and Andromeda. The museum also houses the face of Ulysses, which has now become one of the most frequently reproduced representations in textbooks.

As for the Villa of Tiberius, it formerly consisted of a series of terraces overlooking the sea. Today, only some remains of the kitchen and some remains of the flooring are visible. The most impressive part is the natural cavity. In front of it is still a rectangular basin that once served as a fishpond. The dining room was probably inside the cave. And it was here that the statues now housed in the museum were placed.