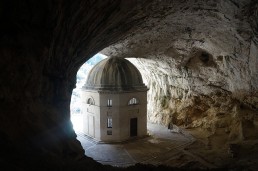 Valadier Temple - The church in the rock

In the Marche region there is a really suggestive temple. It is the Valadier Temple, right at the entrance of a high mountain cave, near Genga and the more famous Frasassi Caves. A decidedly curious place, the interior of a cave, where a temple could be built. Its neoclassical shape, with an octagonal plan, stands out with an extremely suggestive effect against the edges of the cave wall, as if seeking refuge in the dark natural cavity.

In reality, as early as the 10th century and for hundreds of years, people found refuge within the walls of this cave. It was used to hide from the looting that raged in the area.

It was in 1828 that Pope Leo XII, originally from Genga, had the temple built here on top of an old church, based on a design by the architect Giuseppe Valadier. For the pontiff, the place was to be a refuge for Christians who wanted to ask for forgiveness. This earned him the nickname 'refuge for sinners'. Inside, a Madonna and Child sculpted by Canova's workshop was placed, later replaced by a copy. The original can be seen in the Genga Museum.

Today, the Valadier Temple is a highly evocative destination, especially when the traditional living nativity scene is performed at Christmas. It is a place that leaves all those who visit it for the first time breathless, but also those who, returning, cannot help but be amazed every time they find themselves enveloped in its magic.

Enjoying this curiosity? If you want to discover the secrets, legends and mysteries of Italy, download the curiosity app. Download Secret Maps!