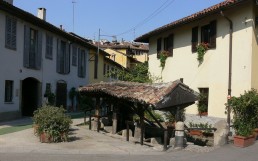 The Vicolo dei Lavandai is a meeting point for many Milanese in the Navigli district, a picturesque corner dotted with many trendy places and a destination for many tourists.

The place is also characterised by interesting curiosities, more or less well-known. For example, in Vicolo dei Lavandai, you can admire a curious wash-house dating back to the last century. A testimony to a time when washing machines did not exist and, consequently, people were forced to use manual methods.

Another aspect that arouses curiosity is that, contrary to what is usually thought, it was not women who did the washing up here, but men. In fact, it was they who created their own true trade association. Founded in 1700, the Confraternita dei Lavandai had St Anthony of Padua as its patron saint and it was to him that they dedicated the church of Santa Maria delle Grazie al Naviglio, located just a hundred metres from Vicolo dei Lavandai.

Along this Milanese alley also runs a stream, 'el fosset', which was fed directly by water from the Naviglio Grande. Here, in what was known as a "brellin", a wooden board, they soaped their clothes.

Recently restored, the Vicolo dei Lavandai (Laundrymen's Alley), a ravine in the Naviglio Grande, has maintained its charm intact. A testimony to the past of the Milanese city, it was in use until the 1950s, and today it is still there, enchanting the Milanese and non-Milanese alike.