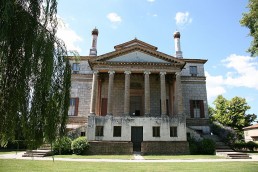 Villa Foscari, known as La Malcontenta, is a Venetian villa designed by Andrea Palladio in 1559. It is located in Malcontenta, a town near Mira in the province of Venice, along the Brenta Canal. It was built for the brothers Nicolò and Alvise Foscari, who belonged to one of the most powerful families of the Republic of Venice. The residence has a majestic, almost regal character, unknown to all other Palladian villas, to which the interior decoration by Giovanni Battista Zelotti and Battista Franco contributes.

But the splendid residence designed by Palladio also has its secrets and, like many ancient residences, can boast its own spectre. It is said that the ghost of Elisabetta Dolfin, wife of the nobleman Nicolò Foscari, haunts its rooms. She was accused in Venice of being a licentious, shameless and unfaithful lady, although she had always proclaimed her innocence.

Foscari exiled her to the beautiful villa that became his prison, probably not a gilded one at all, until his death. The park of the villa was uncultivated and overgrown with weeds and how she survived remains a mystery. No one ever brought her any food and no one ever lived with her in the villa; hypotheses and anecdotes circulate about these strange circumstances. After her disappearance, the white lady is said to have been spotted by those who frequented the villa, glimpsed for a few seconds in its rooms.

Enjoying this curiosity? If you want to discover the secrets, legends and mysteries of Italy, download the curiosity app. Download Secret Maps!