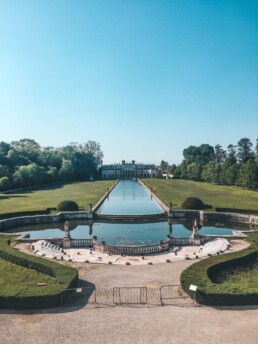 Villa Pisani - The Queen of the Venetian villas

Villa Pisani, the "Queen of the Venetian Villas", is one of the main tourist destinations of the Veneto region, located in Stra, in the province of Venice.
The Pisani di Santo Stefano, who built it in 1721, were a branch of the Pisani family, an ancient Venetian patrician family. However, the vice of the game pushed them to get ruinously in debt. It was for this reason that they were forced in 1807 to sell the villa to Napoleon Bonaparte. Napoleon (who had become king of Italy two years earlier) bought it for 1,901,000 Venetian lire. The villa then passed over time first to his stepson, and then to the Habsburg imperial family. Finally it became a museum in 1884.

Its visit takes place inside the thirty rooms of the main floor, in which, a rare case for a historical residence, frescoes, paintings and original furnishings are preserved. Life in the villa, a place par excellence for games, balls and shows, is represented in the decorations of several eighteenth-century rooms. Among the most enchanting ones, there is the hall of the triumph of Bacchus, celebration of the god of wine and music. Interesting are then the hall of the holiday, which gives a tasty interpretation of the relationships between ladies and knights in the century of Casanova, and the hall of the arts.

Great opulence is achieved in the ballroom, located in the center of the building. Giambattista Tiepolo, the greatest exponent of eighteenth-century painting in Italy, frescoed the ceiling with the Glory of the Pisani family. It is a luminous allegorical composition. Here the figures, lying on rosy clouds, seem to hover on the background of an infinite serene sky.

Of particular interest is the Napoleonic apartment, rich in treasures. Among these is the grandiose four-poster bed surmounted by the emperor's initial. But also splendid are the coffers, the work of the Lombard inlayer Giuseppe Maggiolini. And don't forget the monochromes by Giovanni Carlo Bevilacqua, which narrate the myth of Eros and Psyche, and the precious Empire-style furniture made especially for Villa Pisani.
Did you like this curiosity? If you want to discover more, download Secret Maps!