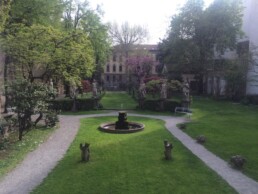 The vineyard of Leonardo da Vinci was a vineyard that Ludovico il Moro gave to Leonardo da Vinci, while he was still working on The Last Supper, as a gesture of gratitude for all the works he had created.
The vineyard was located beyond the district of Porta Vercellina in Milan, near Borgo delle Grazie, on the land of the great vineyard of San Vittore. When the French invaded the Duchy of Milan, forcing Ludovico il Moro to flee and take refuge in Innsbruck, Leonardo also left the city, heading for Mantua. So, he rented his properties to the father of his student Gian Giacomo Caprotti, called the Salai.

However the vineyard was requisitioned by the French and given back to the legitimate owner only in 1507. Charles II d'Amboise found himself compelled to do so when he asked Leonardo to return to Milan, from Florence where he was. He wished him to finish some works he had begun.

Here, he stayed until 1513. From Milan he then repaired to Rome and finally to France, where he died. In his will, he ordered that the rectangular vineyard be divided into two equal lots. One was assigned to Salai, who had built his own house on that land, and the other to Giovanbattista Villani. Villani was the servant who had followed him to France.
Five centuries later, in 2015, on the occasion of Expo 2015, a new "Vineyard of Leonardo da Vinci" was built near the original site. Through a scientific examination of plant remains in the area, the variety of vine cultivated in the past was also identified.
Do you want to discover other curiosities? Find all the most secret corners of your city, download our app!