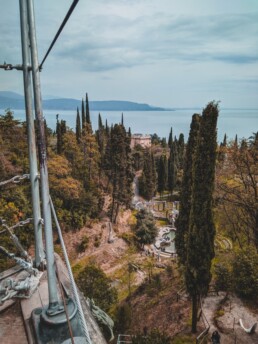 The Vittoriale degli Italiani, also known as the "Vittoriale", is a monumental complex erected at the behest of Gabriele d'Annunzio from 1921.

The famous poet, journalist, soldier and patriot from Abruzzo, stayed in Gardone Riviera. And after falling in love with the panorama of Lake Garda, he decided to buy the property on which today stands the Vittoriale. His dream was to make it a place of memory of his own exceptional life and that of the Italian people during the First World War.

The Vittoriale is a great little world in itself, perfectly set in the lake territory, made up of gardens, streets, squares, libraries, waterways and even an amphitheater. Each area, external or internal, conveys the particularity and the imaginative person of d'Annunzio, who collected here as many relics as possible: sculptures, medals of valor, relics, thousands of books, works of art of all kinds. In short, a house-museum to the nth power. In addition to what you would never think to find, scattered along the path of the entire complex. Some examples? The SVA plane or the military ship Puglia.

The military ship Puglia, which is located under the hill mastio, was donated to D'Annunzio by the Navy in 1923. To bring it to the Vittoriale was a work particularly challenging: it was a matter of sectioning a ship and transporting its prow by rail to 300 km from La Spezia; twenty railway wagons and many military trucks were needed for the undertaking. The prow, symbolically facing the Adriatic and Dalmatia, was adorned with a figurehead depicting a Victory sculpted by Renato Brozzi.
Did you like this curiosity? If you want to discover more, download Secret Maps!